Dick Jarvinen got the Allies for a bid of 1.5 and opened with a Barents on 1 strategy. Both British battlecruisers make their speed rolls.  With two carriers in the North Sea, the Allies send 4 BBs to the North Atlantic which tempts the Axis there with both surface and U-boats. ASW misses and the subs land 1 hit for 2 damage.


LBA strikes on both sides as the Renown and the Guilio Cesare are sunk.


In the North Atlantic, the Graf Spee is sunk in exchange for the 4 British battleships. However British gunnery disable most of the Germans, landing only 1 hit to cripple the Admiral Scheer.

The Allies go for 4 sea areas again while the Axis counter with just U-boats to the North Atlantic. The Luftwaffe hits the Repulse for 3 damage while Allied ASW sinks 1 u-boat. Allied Air ignores the repairing Scheer to target the Italians but miss with their extra die roll.  POC stays unchanged

With the Okt Revol sailing, the Allies cover 5 sea areas and , they succeed with all three speed rolls to th Barents, However minus the repairing Repulse and down the Renown, the Barents force tempts the Axis to sortie. Axis air disables the Hood, while the Okt Revol sinks a U-boat. The U-boats land 1 damage on the Okt Revol in return.


In the ensuing surface combat. Scharnhorst, Scheer are sunk in exchange for the Prince of Wales and 2 cruisers. Most of the rest are disables as Bismarck takes 1 damage while the KGV is crippled and the Duke of York and Kent take 1 damage.
3 cruisers are left to face the Dorsetshire and Ark Royal which flee in separate groups.


In the pursuit, the retreating Dorsetshire  sinks the Prinz Eugen while the Ark Royal is disabled.

With the convoy heading to the Barents, the Axis elect to sortie to the North Atlantic with everyone but the repairing Bismarck and the Lutzow in the Baltic. Allied LBA sinks the Fiume in Italy, while the Luftwaffe disables the Ark Royal while missing Convoy 1A. The Subs disable the Eagle and break control of the South Atlantic.


In the North Atlantic, the Cumberland is disabled by the Graf Zeppelin while the Allied carrier misses. The Axis sink the escorts and the Convoy while the Allies fail to do any damage.

A full strength Axis u-boat fleet of 7 breaks control against the 12 ASW and sinks the Glorious. Allied air sinks the Zara and ASW sinks 1 U-boat.

With the North Sea open, the Axis can hit every sea area. Limited Allied assistance comes in and the US elects to hold Convoy 3C in port. The Axis send everything but the Baltic guardian Lutzow to the North Atlantic and with the success of the two speed rolls of Bismarck and Tirpitz, the Allies resign. 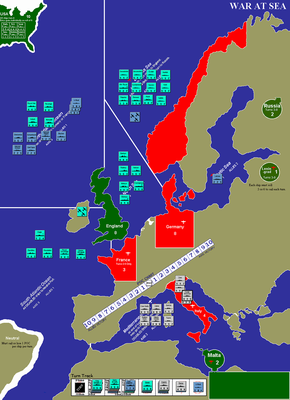 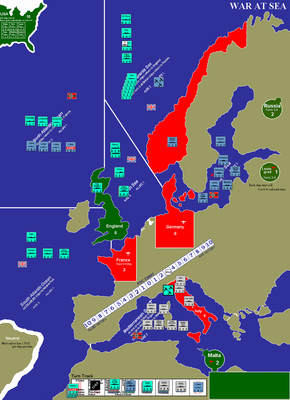 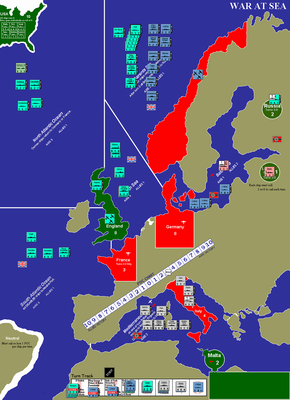 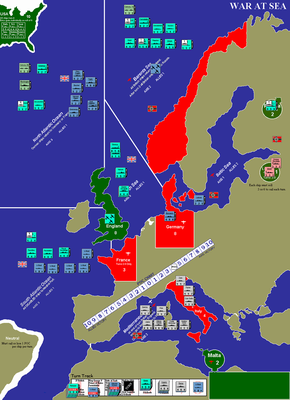 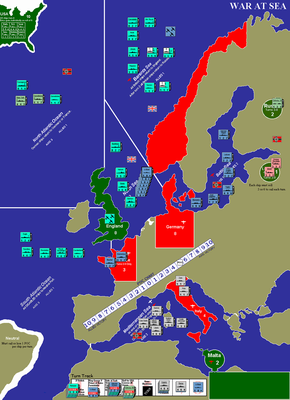 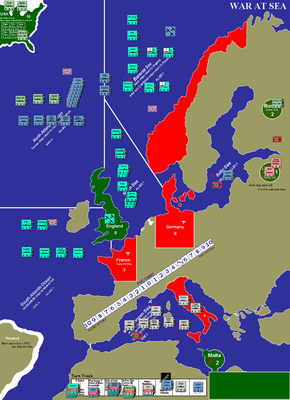